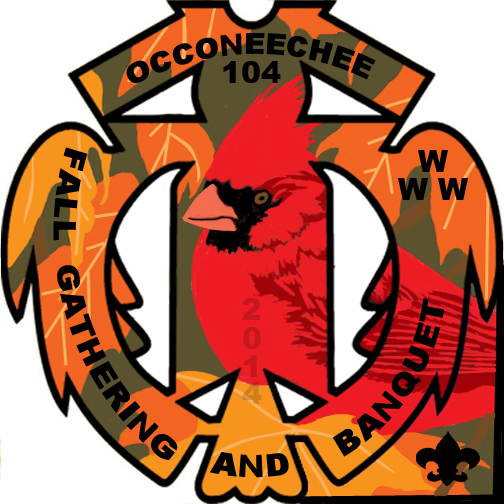 Fall Gathering started with our traditional Friday Night Camp Fire. Our newly elected officers performed an entertaining skit about what they’re going to do differently in 2015. Another fun skit featured “Family Feud” starring the Blair Family and the Past Chief Family. And don’t forget about our musical entertainment from our Vice Chief of Communications, Gray Barnhill!

2015 Lodge Officers performing a skit at the Friday night campfire.

Soon after Camp Fire, we journeyed to the Grand Lodge for crackle barrel and a movie.

Saturday morning began with the AIA Expo. Brothers got the chance to learn more about the AIA, as well as some of its various aspects including Dancing, Drums, Singing, and Regalia.

The American Indian Affairs Committee did a great job in showing Arrowmen the importance of the traditions of the Native Americans. – Stephen Nuttall, Vice Chief of Program

Learning how to play the Drum at the AIA Expo

Along with the AIA Expo, attendees could view a demonstration of the new 2015 Brotherhood Ceremony and participate in service projects going on throughout the camp to clean up from Camporee the previous weekend.

Dinner line at the Banquet

Fall Gathering was an awesome and exciting, brand new event that encompassed lots of learning and a great banquet at the end. – Gray Barnhill, Vice Cheif of Communications

Please join us in congratulating the 2014 Occoneechee Lodge Vigil Class.

This award is given to any  Arrowman, youth or adult, for providing significant service to the lodge. The award is given upon attainment of 104 service hours. This award may be earned multiple times within the same year.

Recipients of the 104 Service Award

An award is given to those Arrowmen who remain active participants in their troops. There are eight requirements to be completed over the course of a year that includes such things as contributing service to the troop and participating in troop outings and meetings.

Recipients of the Troop Service Award

This award recognizes Troops with considerable efforts put towards both the Order of the Arrow and Scouting.

The William Stanley Roth Award for Outstanding Chapter Service is given each year to the chapter that devotes the most service to the council, camps, community, and lodge. Over the course of the year, the chapter and its members accumulate points based on their participation in the aforementioned activities. The chapter with the most points wins the Roth Award.

This patch is presented to Andrew Bain for his performances in Native American Dances.

This award is earned by a youth Arrowman singer. Before turning 21, the recipient has participated in several singing events at the lodge and section level. The recipient has also demonstrated a thorough understanding of singing techniques and etiquette. 2008 marks the first year that an Arrowman has earned this award.

Cody Helm (right) is presented with the Hoka Award

Two youth and two adults are chosen annually by the Lodge Key 3 (Lodge Chief, Lodge Adviser, and Lodge Staff Adviser) as the recipients of this award. Recipients are awarded director’s chairs.

The Key Three award is presented to:

The Chief’s Award is presented to the Chapter, in the judgment of the lodge chief, that has improved the most over the past year.

James E. West was the first Chief Scout Executive of the Boy Scouts of America, and he served in that position for more than three decades. The West Fellowship award is available for gifts of $1,000 and up in cash or marketable securities to a council endowment fund. The gift must be in addition to—and not replace or diminish—the donor’s annual Friends of Scouting support.

The Founder’s Award was established to recognize certain registered, active Brotherhood or Vigil Honor members of the Order of the Arrow at the local Lodge level. The member’s life should reflect a spirit of achievement in his everyday activities. Through his everyday life he should show:
An understanding of the world he lives in
A determination to do his best at all times
An enthusiasm while doing what he believes should be done A belief in, and a commitment to, those “things of the Spirit” (Brotherhood, Cheerfulness, and Service)
The Founders Award goes to:

Passing of the Bonnet

Please join us in congratulating our 2015 Lodge Chief, A.J. Raulynaitis

A.J. Raulynaitis expresses his appreciation to others for his upcoming position

Please join us in congratulating our new Lodge Officers of 2015.

Thank you to the Lodge Officers of 2014 for doing a fantastic job moving our Lodge forward. If you see a past lodge officer, make sure to offer your appreciation.